Everything you need to know about French cheese 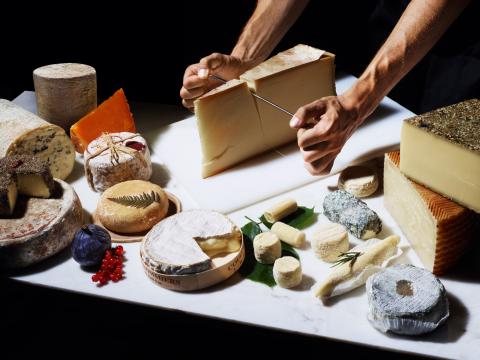 France is a country which can count between three hundred and fifty to four hundred different types of cheeses. We can divide those into separated families, either based on the milk origin (cow, goat, sheep) or more often classified according to the firmness and hardness of their crust. Soft cheese, rind, pressed cheese, uncooked hard cheese etc…

What is french cheese all about?

French cheese is part of the culinary and gastronomic heritage of French culture. French cheese are primarily Terroir’s products, most of the time produced in very specific and limited regions upon traditional, sometimes ancestral, methods. The variety and diversity of French cheese is explained by the different climatic, geographic and sometimes geologic conditions of the French territory.  For example, in Poitou and Touraine, there is less grass in summer, that’s why it is a region that adapts better to goat cheese than it does to cows. In Normandie, the weather is very humid, insuring abundant grass and milk all year long which is more favorable for camembert production. Thus, French’s regions have given names to their cheeses representing an artisanal know-how and traditions transmitted from generations to generations.

How to enjoy French cheese?

French cheeses are generally enjoyed after a meal, before a dessert or can even replace it. A fine cheese plate will offer a wide selection of dairy to fit every taste and present a great variety of textures and colors. Associating them with a touch of sweetness such as jam, balsamic vinegar, grapes and nuts is a MUST-TRY as it balances the taste, creates a contrast and enhances the nature of each cheese.